“The wound is the place where the Light enters you.” –Rumi 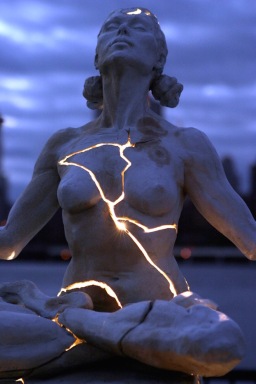 I used to work a ‘regular’ job. A place where I was a single drop in a sea of beige cubicles and walls that consumed anything that stayed too long. While corporate America was siphoning my passion slowly, I perfected the art of daydreaming and found countless ways to occupy my time while I planned the great escape from my khaki prison. My favorite distraction was of course a boy. I was 25, had low self esteem from years of unhealthy relationships and his attention was like the first day of full sun after Winter. I would bask in the glow of his daily e-mails, morning calls that always began ‘Good Morning Sunshine’ and walks to and from lunch. We started as friends but quickly our relationship grew into something more. He was separated from his wife but not yet divorced so our meetings were confined to the occasional ‘out to lunch’ or the cliché ‘after work meet up’ as he didn’t want to be disrespectful to his wife.  I was also in a committed relationship with a wonderful guy which complicated an already sticky situation.  Looking back it clearly wasn’t the right time for either of us to be starting a relationship  but rational thought was often overruled by my heart during that time.  I was selfish as I wanted the security of my boyfriend but the excitement of something new.  After about 8 months of this bitter sweet torture, the pain of having him all day and losing him each night was becoming unbearable. I knew the relationship couldn’t sustain but I had no idea how to end it. I was hopelessly in love with someone who had too many loose ends to truly be with me and was consumed with guilt for hurting someone I also loved very much.

One late fall day as I was leaving work, I was overcome with a crushing grief out of nowhere and the tears began to spill. The pain of my reality consumed me so quickly I had no choice but to submit to the tidal wave of grief. He was driving in front of me and saw how upset I was, he called to urge me to pull over. I followed him to a small park which boasts the largest tree in the state and stands like a giant guardian on the edge of a riverbank. Lost in my sadness I was barely aware of the dusky November sky bursting with crimson and deep orange glory. I sat in his truck while he rubbed my back whispering, “You are the strongest Woman I know and can handle anything life throws your way.” His kindness was bittersweet as I still had no idea why the tears would not stop. After a few minutes we sensed our time was up. Just as I was leaving he turned and said, “I don’t want to go” to which I replied “I don’t want you to go either”.  Those words hung heavy like humidity in the air as the truck door closed. My heart was grieving what my mind couldn’t possibly know. That was the last time I would ever see him again, he died 3 hours later.

In my devastation I immersed myself back into the holistic health field I had always been drawn to and comforted by. I attended a class the weekend after he died and met my soul sister Kat who I later I co-founded a Holistic Center, Soleil Healing & Arts, with. Our grand opening  was three years to the day that he died and on the 4th anniversary we opened our second location.  Both dates were ‘coincidental’ although I felt some larger force at work.  Eventually the centers began to put a strain on us financially and we decided to look for part time jobs while we worked on some other ideas to expand Soleil.

On the morning of August 12th, 2009 in the space between sleep and awake I clearly heard his voice say ‘Good morning Sunshine’ three times. It was as if he were next to me and it brought me right back to all those morning chats, lunches and times we shared. Although I’ve never ‘heard a voice’ before it felt strangely peaceful and I was comforted by it. As I grabbed my coffee and my laptop to job hunt I replayed the incident wondering if it was some kind of sign, I am a big believer that life will offer you signs if you are open to them. As I looked on Craig’s list for waitressing or housecleaning I saw an AD for an ‘Environmentally Responsible Company’. I immediately called as I’m a self proclaimed tree hugger, environmentalist and all around nature lover. It was listed as a part time job through the summer to earn some extra income. The gentleman who answered seemed genuinely surprised I called as he had just posted the ad less than 3 minutes before. During the course of our conversation he called me Sunshine three times and had the same first name as my love who died. I was overcome with emotion and knew in an instant this was something bigger than me and I needed to pursue it.

That day marked the beginning of an ongoing DREAM career with a company that has sent me around the world, paid me more than I ever could have dreamed of all for doing something I love. As if I needed more ‘proof’ the first payday from the company was the 5th year anniversary of the day he died. I’m now happily married to the man of my dreams and live a life so abundant I feel humbled on a daily basis! It’s hard to convey the depth of gratitude I feel for all the unseen forces that conspired to make this possible and still guide me on my path today. I for one know Miracles are possible for anyone willing to let their heart lead the way. And sometimes when your heart breaks wide open or you feel shattered, that ‘opening’ allows unimaginable gifts to enter your life!

Here is a poem I wrote 1 week BEFORE he died. It’s clear that our heart and soul knows things our minds cannot comprehend….

On my knees, hands stretched on the sand before me
In a total state of surrender
Letting my breath return to its rhythmic pace